On Pins and Needles About Animal Acupuncture?

Animal acupuncture might seem like a trend, but actually, it’s been around for thousands of years. According to the International Veterinary Acupuncture Society (IVAS), “acupuncture is used all around the world, either along or in conjunction with Western medicine, to treat a wide variety of conditions in every species of animal.”

When you think acupuncture, you may think: fidgety pets + lots of needles = bad combo, however; the IVAS says it’s one of the safest forms of medical treatment for animals when administered by a properly trained veterinarian.

Used for treating reproductive, musculoskeletal, neurologic, pulmonary, gastrointestinal, and dermatologic disorders in all types of species, many licensed veterinarians swear by its healing abilities. In an article by VCA Hospitals, the authors say that there’s evidence of success, with a rough guide being 25% of patients show major improvement, 50% show significant improvement but still have some symptoms, and 25% show little or no benefit. 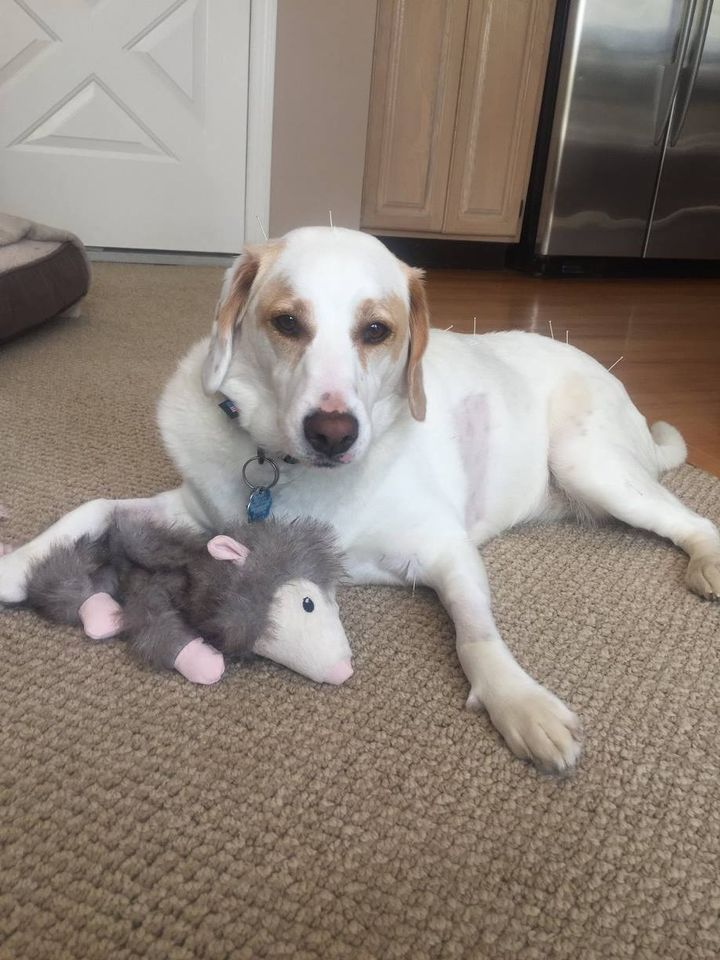 For Dr. Rachel Barrack, DVM, CVA, CVCH, founder of Animal Acupuncture in NYC, improvement was seen in her four-year-old patient, Luca, a female spayed mixed breed dog. “Intervertebral Disk Disease (IVDD) is a serious condition in which the cushioning discs in between the vertebrae bulge or herniate into the spinal cord space. This causes nerve compression resulting in pain, nerve damage, and even paralysis,” says Dr. Barrack.

“After becoming acutely paralyzed in her hind end, she had to have emergency neurosurgery in an effort to rectify the situation.” Dr. Barrack ads that, “Today, through a combination of Western and Eastern therapies (including acupuncture and Chinese herbal therapy) Luca is progressing towards a full recovery.”

So, why does a practice that is recognized by the AVMA have controversy surrounding it, and why hasn’t it been more universally adopted in veterinary practices? “There are many misconceptions surrounding acupuncture: one being that it isn’t ‘real’ medicine’,” Dr. Barrack admits. “Another common misconception is that acupuncture hurts.” But, as she further points out, “the results in practice speak for themselves.”

What about the pain? “In almost all cases acupuncture is relatively painless,” states Dr. Barrack. “Some animals may experience minor discomfort when needles are being inserted, but the needles are so thin that most patients tolerate them very well. Acupuncture is known to have a relaxing effect to the point that some animals even fall asleep during treatment.”

As for being adopted more universally, Dr. Barrack believes acupuncture and Chinese herbal therapy are both steadily gaining popularity in human and animal care in the US:

“As people strive to lead more natural, organic lifestyles for themselves and gain good results via acupuncture, they then seek to offer their pets the same benefits. Acupuncture and Chinese herbal therapy can also be utilized synergistically with traditional western care to achieve the best medical care possible from both worlds.”

On pins and needles about how to earn CE this year? Have no fear! Earn up to 20 FREE RACE-approved CE credits at Vet Show @ Home. Registration is open.